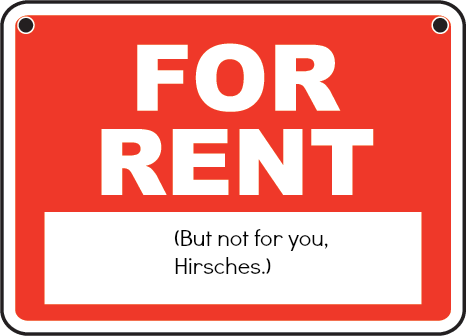 Last week Jordan and I were this. close. to renting an apartment that would have saved us $1100/month in rent. (Meanwhile, my friend in St. Louis points out that her entire mortgage is $1000/month… and here I am trying to reduce my rent by that amount.)

Anyway, we didn’t get it, because the landlord decided Clover was too big for his tastes (she’s 60 pounds, and he wanted 40 pounds of pet or less, because clearly it’s those last 20 pounds that really do the most damage). So he passed, despite our strong credit, ability to pay more than 40x the rent annually (the benchmark here in NYC), and overall adorability.

Jordan was devastated. To him, the apartment represented the chance to relieve significant financial stress (as a reminder, I’m currently unemployed), and the kicker? It was next door, so we wouldn’t even have to disrupt our lives. No new routes or routines to establish. The library would still be down the block. The grocery store we like would still be around the corner. And so on.

Plus, there was a yard. A yard, people.

So, yeah — he was devastated. And I don’t know if it’s just because I’ve been shit-kicked in the teeth enough this year, or I’m reaching some state of enlightenment, but my reaction was, simply: “Huh. I guess that wasn’t our apartment.”

Don’t get me wrong, I would love to save that money. But I realize, it’s not up to me. I don’t get to engineer the solutions to things. I just throw my hat in the ring and hope for the best. If it’s meant to happen, it will; if it’s not, it won’t.

I threw my hat in the ring for something else big last week, which I don’t want to talk about in detail unless it happens, but I did it. I also threw our family’s hat in the ring at a private school for Ali that I have no idea how we’d pay for, but it speaks to me, and they offer sliding scale tuition, and nothing ventured, nothing gained.

I’m telling the universe what I want, and I’m taking steps in pursuit of those things.

I’m doing all I can. 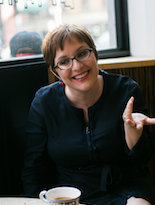 This is it, folks. I’m signing off Instagram. It’s gonna be a hard habit to break, but I can’t and won’t use a platform run by such a corrupt company. If you long to engage with me via social media, you can find me on Twitter at @amanda_hirsch.
Such a moving film by my friend @markpartridgefilms about Hurricane Maria’s effects on his beloved Puerto Rico. And such creative, poetic storytelling. Honored to be here tonight at @nymediacenter. And thrilled to be able to witness a friend’s blood, sweat and vision. #Repost @markpartridgefilms with @get_repost ・・・ Hi! Just a reminder that Forgotten Island will be screening at the @nymediacenter this Thursday, December 19th at 7pm. Please stop by and say hi! The screening is FREE!! See you Thursday!!#puertorico🇵🇷 #documentary #documentaryfilm
#Repost @makerswomen with @get_repost ・・・ Don't be afraid to think outside the box. (Via @femalequotient)
Thank you to @peteybergen, improv community builder extraordinaire, for having us at the most wonderful show of the year. We are so looking forward to it❤️#Repost @chinesemenucomedy with @get_repost ・・・ Meet the cast for this Sunday’s show! Jordan and Amanda Hirsch! This high school sweethearts now live in New York City but before that they were part of the all-time great team, Jinx! at @washingtonimprovtheater. We are so lucky to have them back for this year‘s holiday show. Come see the show on Sunday. Link in bio.
“How will you live and lead for the outliers?” Callan Blount Fleming of @_sparkcollective was on fire tonight at @bealuminary sharing her inclusive vision for the future of work. Callan is a powerful woman leader, which you may have figured out is my drug of choice. #womenleaders #womenlead #womenleadership #womeninbusiness #womensupportingwomen #futureofwork
Meeting and greeting in NYC #dogsofnyc #dogsofnewyork #nyc #manhattan #nycstreetstyle #nycstreets #dogsofinstagram
%d bloggers like this: